TOBE NWIGWE – ROUND HERE (PART ONE)

For ‘Stepping Razor’ Spring/Summer 21, Nicholas Daley explores the meeting of martial arts and reggae culture during the 1970s, digging deep into a unique cross-cultural connection felt across the black diaspora.

Legendary reggae artist Peter Tosh plays a central role in this season’s narrative with his 1977 single release, “Stepping Razor,” lending the collection its name. Alongside close friend and collaborator Bob Marley, Tosh was intensely interested in martial arts, both as a mode of self-defence and means to self-enlightenment. A fan of Bruce Lee and Jim Kelly (Enter the Dragon), Tosh was a black belt in karate and would often incorporate dramatic combat moves into his idiosyncratic live performances. His martial arts stage attire became a signature look and represents a key reference point for Nicholas this season.

Drawing a line between past and present, Nicholas calls on Jordan Thomas to model this season’s collection. A former World and European Champion and Britain’s first Olympic karateka, Jordan is due to compete at the Tokyo 2020 Olympics. The son of William Thomas, himself a former European and World Champion, Jordan was raised in the discipline, guided by family friend and legend of the sport, nine-time World Karate Champion, Wayne Otto. The collection highlights the significance of black karateka athletes in British sport over three decades of elite level competition.

“Whether through the development of unique textiles with specialists in Japan and the UK, the music of reggae legend Peter Tosh or the unique story of black British karateka athletes told via World Champion Jordan Thomas – everything becomes interconnected and pushes my own creative journey, uniting fashion, music and culture” – Nicholas Daley 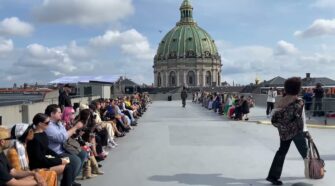