Demi Lovato – I Love Me

Nba Youngboy- It Ain’t Over (Interlude)

M’A X NENNY
For AW21 Marques’Almeida launches a film – M’A x NENNY – the result of an ongoing collaboration with singer and rapper Nenny and her artistic team. AW21 collection is put on show through Nenny’s performance and that is, for M’A, what the brand is all about. Empowering young artists’s creative expression while they literally bring the clothes into life, strengthening bonds within the community and connecting people and ideas.

Originally from Lisbon but living in Luxembourg, Nenny tries hard to stay close to her best friends and family through technology. This film aims to explore how Nenny keeps working on her music during the pandemic and reaches out for what matters the most to her.
Take a look inside Nenny’s world on schedule at LFW on the 21st February at 11h15 GMT.

Nenny is a Cape-Verdean/Portuguese singer, songwriter and rapper. Nenny launched her debut album “Aura” in 2020 and is part of A COLORS SHOW of the single “Tequilla”.

The Interrupters – “Raised By Wolves” 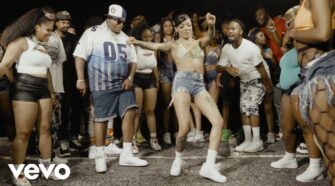